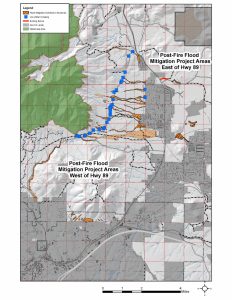 The proposals seek to minimize private land damage and protect watershed resources and will target areas within or directly adjacent to the 2022 Tunnel and Pipeline burn scars.

Some of these areas, adjacent to both private land and City of Flagstaff land, were previously analyzed and approved for post-fire flood structures after the 2010 Schultz Fire.

However, additional damage caused by the Pipeline and Tunnel fires have severely exacerbated flood risk in downstream areas.

Proposals include armoring soils and building watershed structures out of logs and boulders to limit erosion. These proactive measures will stabilize burned drainages and ideally manage storm flows away from neighborhoods.

These specific project areas are located northeast of the City of Flagstaff, both west and east of Highway 89, and on the north side of Flagstaff in the Schultz Creek drainage.

The Coconino NF is reviewing these proposals through the National Environmental Policy Act (NEPA) planning process.

Specific details on the proposed post-fire flood mitigation efforts can be found on the Coconino NF’s website:

Comments received will be considered project public record and will be made available for public inspection.